Chaconne for Piano Trio and Electronics was composed during the rst week of March 2020 in Thessaloniki as a part of metaξ project with LongLeash Trio in New York. The piece is largely based on the following poem written by Gundega Smite and Dimitris Maronidis. The piece is a Chaconne in the sense that the imaginary sound of a breaking glass is re ected constantly in all musical gestures. The premiere of the work was given on 15th of April 2020 by LongLeash Trio at DiMenna Center for Contemporary Music at New York. 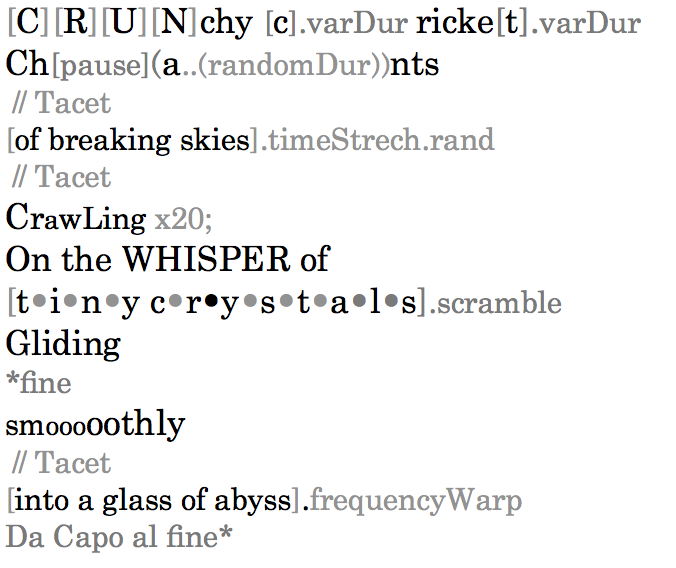 Orbits is an electroacoustic piece for piano and tape and it was composed in 2014. The piece is dedicated to Gundega Smite who gave the premiere of the piece on July 2014 at Sigulda.

Orbit is the curved path of a celestial object or spacecraft around a star or planet. The eccentricity of the path and speed of the moving objects can vary. In this respect sound is treated in this piece as a moving object. Electronic and piano parts can be considered as two celestial objects moving either in regular trajectories or deviating from circularity.

Improvisation
for harp and tape [2005]

I composed this piece many years ago after having first listened to Luigi Nono’s “Il canto sospeso”. I then tried hard and found a book in Italian with texts written in the prison by people condemned to death by Nazis. In these texts, written usually a few hours or minutes before of their execution, people of any age, were expressing their dreams and hopes for a new world. Their soul strength and their mental sobriety -just a few moments before they had to face death- had a strong impact on me. I was motivated and tried to express my feelings about their sacrifice and their beliefs… … a tutti loro… Thessaloniki, 2009

Contrapunctus
for Midi keyboard and Max/MSP [2003]