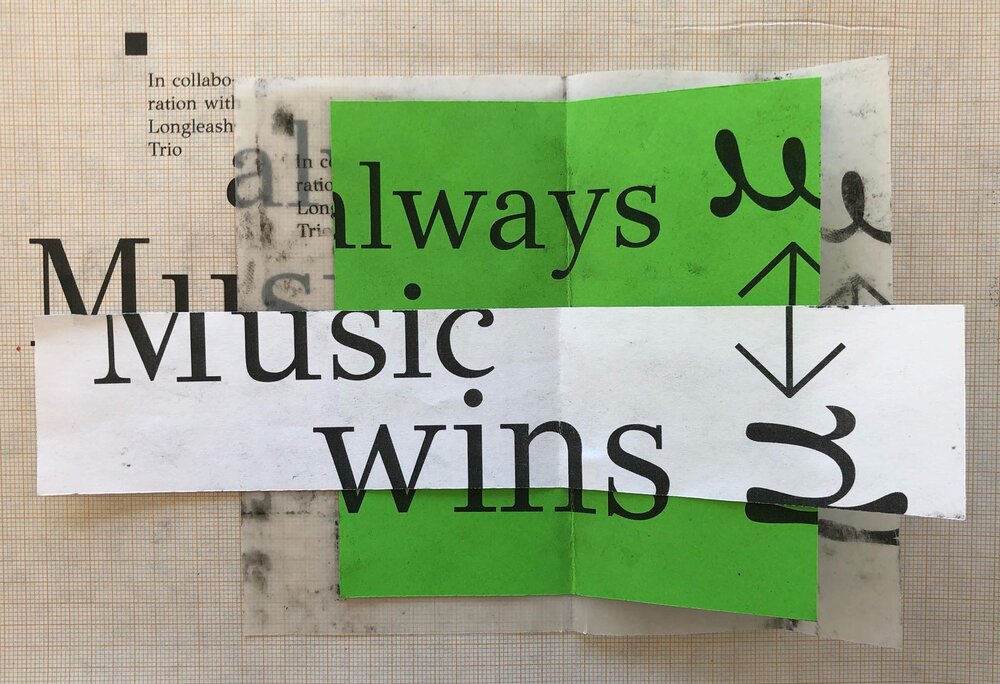 Chaconne for piano, violin, Violoncello, and fixed media is going to get its premiere in New York on the 7th of July 2021 by the American Trio Longleash. The piece is focusing on the sonic moment of a glass breaking and creating a crystalline sound while its particles fall apart on the ground. A special poem was composed by Gundega Smite and myself for this purpose and was used as an outline for the development of the form of the piece.

When asked about his work words and music and the battle between the two, Samuel Beckett was clear: music is the absolute winner, as it “is the idea itself, unaware of the world of phenomena”2, in contrast to Beckett’s view on language and its expressive limitations

This is indeed true, since music ―especially abstract music― has no signified meaning, at least in the way language has. Even when an extra-musical idea or text is signified through the music, to the unaware listener music remains ―and can be perceived as― a signifier, since there is no established code attaching certain meanings to certain sounds.

When it comes to a live performance of music, is this autonomy a virtue or a flaw? Especially when more than one fields of art are involved and a certain ―or uncertain― message is to be delivered, is the absence of the signified a desired quality of music?

At the bottom line, this principle seems to be inevitably present. Thus, the question raised is not how to change the nature of music, but rather the way it is perceived. That is, to question Beckett’s note: why does music always win? Why is language ―or its visual representation― inferior to music?

In a conventional concert situation, the audience is placed against the stage (and the music) and perceives it in a rather passive way, in the sense that no action that can interfere with the performance is meant to be taken. In this way, any other element that could possibly function as a reference (or even signified) is imposed on the top of music and is decorative. In this situation, music wins again.

In tonight’s concert, music comes with text. The text exists in the music, through the music or against it, but it also exists as an image in printed material. To avoid having a concert surrounded by visual elements, the composers will compose their pieces addressing the relationship between text and music but also the communication of this relationship to the audience. The visuals are also directed to this goal. Still, the problem of a passive audience is present.

To essentially engage the audience to a more active experience, without necessarily creating an interactive, fluxus-like performance, a sort of dramaturgy is required. That is the final scenery consisting of pieces of music and visual elements to have a flow in time, beyond the linear succession of the pieces.

Besides the structural qualities that lead to such an approach (I.E. The self-referential material of some of the text, fragmental structure of some of the pieces), certain staging strategies will be examined (some or all of the following): different positioning of the ensemble, no fixed positions for the audience, different lighting addressing various aspects of the visuals, an acting moderator, etc.